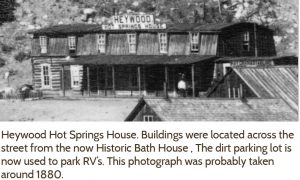 D.H. Heywood was a government surveyor who was hired to survey and map what became known as the Arkansas Valley. He was also an opportunist, not an unusual condition in the 1870s.

Multiple times, Heywood located valuable properties while doing his contracted surveying work, and he would have friends file a claim on the location, predating his official survey. Later, the friend would quit and claim the property to Heywood’s wife.